The Design procedures detailed in this book reflect the authors’ own experience and research.  The authors takes no responsibility for the use or misuse of the information contained herein.

No part of this book may be reproduced, stored in a retrieval system, or transmitted, in any form or by any means, electronic, mechanical, photocopying, recording, or otherwise, without the written permission of the publisher.

'Bezier Chine Design and Construction' is a completely pre-engineered design and building process.  This book is not intended to instruct anyone on the intricacies of Yacht Design, but to introduce Designers working in steel and aluminum construction how to apply  'Approximate' Sheetmetal pattern development to the complex True Round surfaces encompassing the hull, deck, and house shell plating.

The book covers the idiosyncrasies specifically related to metal boat design and construction, such as: The limitations of Developable surfaces, the 'Natural Lay' of Sheetmetal, 'Floating the Longitudinals', Working with Developable and Ruled surfaces, Theoretical chines, and more.

The two principle programs for the purposes of this book are:

·         A 3D dimensional Surface marine design program, where the entire boat structure can be defined.

·         The 3D marine Surface design software, I use, needs a little describing.  In this software there is a 'Hierarchy of Entities' where complex surface designs are built up from 'Points', to 'Curves', to 'Beads', to 'surfaces', to 'Snakes', to' Ring' Objects, in the form of 'Parent-Child' relationships.  This relationship will unfold in [Figure I], [Figure II], and [Figure III].

·         The Entity that creates an Object is presented in Bold text enclosed by  parenthesis.   For example:  (Entity).

·         The name of the Objects created by an Entity will be in Bold and Italic text and have No Capitol Letters.  For Example:   object name.

In this example [Figure I-P] I have created four (4) (Absolute Point) objects named Control pt #1, control pt #2, control pt #3, and control pt #4.   These points will be used to define a (B-Spline Curve) named base curve.  The 'points' are the parents of the 'curve'.

With 'Parent'-Child' relationships you cannot delete any of the 'points' that define the 'curve', without deleting the 'curve' first.  The 'curve' base curve is the 'Child' of the 'Parent' 'points':

Control pt1, control pt #2, control pt #3, and control pt #4.   However, you can move a point to another location and the curve base curve will instantly update to reflect that change.

For clarity, the parent 'points' that define the (3) three (B-Spline Curves) in [Figure II-P] named curve one, curve two, and curve three have been hidden.

To locate a position on a 'Surface' a 'magnet' is created.  A 'magnet' is constraint to lay on a 'surface'.  Its position would be determined, again, by a parameter know as 't'.    There a two (2) values for 't' for a 'surface' entity.  They are 'u' and 'v'.  In this case 'u' runs longitudinally and 'v' runs vertically.  The four (4) corners would determine the values of 't' at each corner of the 'surface'.

(Absolute Ring), named ring one, will be the 'child' of snake one.  As with 'Curves' the value of 'T' is used to define location of a  'rings'.

The Parent-Child relationship goes on and on.  If the Designer decided to delete snake one for example, he could not be able to do so without deleting the 'ring' named ring one  first.


A soft border Image like this is a Photo or Sketch.

A narrow bold border such as this indicates that the drawing was created using the 3D Surface Marine Design Program.

A wide bold border such as this indicates that the drawing was exported into a 2D drafting Program.

The starting point is a blank computer screen and an initial hand sketch [Figure IV-XYZ] along with a great deal of assumptions, target design coefficient's, basic structural calculation, displacement guestimates.  You name it.

This book is not about any of your design objectives, except one, incorporating those objectives into a True Round Metal hull design where every part of the hull, deck, and superstructure can be pre-engineered.

This book  centers around the 'Prototype' and 'Proof of Concept' build for 'Bezier Chine Design and Construction'.  The Bezier 12.5 is a type two  hull design where the True Round Surface runs from the Sheerline around the turn of the Chine to a flat developable surface at the bottom of the hull.

Master Curves are the framework [Figure V-P] that support the surfaces that define the hull.  There are seven Master-Curves use to define both the True Round and Developable portions of the Bezier 12.5.

Before actually beginning  I would like to acknowledge that I am aware of the Design Cycle [Figure VI], however do to necessity the process is presented in a very linier fashion.

With my hand sketches and assumptions at hand I usually start a new design with an (AbsPoint) located at 'x' = 0.000, 'y' = 0.000 and 'z' = 0.000.  This location represents the location of the 'Design Waterline' at the centerline of the hull and the foremost point on the hull.  I usually name it base pt.

The very next point I establish is the Fore Point of the hull.   Its position in 3D space is: 'x' =  0.000" 'y' =  0.000 'z' = 27.444".  This location represents the foremost point of the sheer line on the centerline of the hull, and the distance above the 'Design Waterline.  I name this point mc-1-pt-1.   With these two single points established, believe it our not, the model takes form within my mind.  I instinctively see the master curves to be created to define the Bezier 12.5.  Well I do have all my Sketch's and Calculation to guide me.

The key to 'Bezier Chine Design and Construction' for type One and Two configurations is based in the tangency between the  surface types.  This tangency point-curve is represented by Theoretical Chines between  two

surface types.  To the Builder it may not look like a Chine - To the Designer it is a Chine.  The Theoretical Chine point between surface types is most visibly seen in a section view of a Transverse master-curves.   Master-Curve Three(3) is used to illustrate.  [Figure VII-XYZ].

While this configuration of (Absolute Points) to define Master-Curve Three is accurate in all ways including the 'Point of Tangency' between the two surfaces, there is however somewhat of a caveat.  It we were to move any of the support points, the 'Point of Tangency' would be lost.  In other words the two surfaces would no longer flow smoothly into each other.  There would no longer be a Tangency between surfaces at mc 3 pt 3.

To define the 't' location of mc 3 bead 2 we will drag it to a position where it directly over mc 3 pt 2 or as close as possible.  To substitute one point for the other delete curve mc 3 bezier and point mc 3 pt 2.

Your Computer Model of the Bezier 12.5 should look like [Figure X-P].


The three (3) Longitudinal Master Curves [Figure XI-P] are created next.  The are:  Sheer long, fairing long, and chine long.  These Longitudinals fair the lull along its length by manipulating the points that define the transverse Master-Curves.  Note, that the fairbody longitudinal previously created  is divided into two distinct curves - mc-1 and lower-fairbody.

The Bezier 12.5 has a flat transom, angled to the degree of the keel  and sports a little tumblehome. [Figure XII-XYZ] and [Figure XIII-P].

In profile move, sheer bead aft and Fairbody bead aft past the endpoint of their 'parent' curves to a position that meets your expectations of the transom angle and the desired aft Points of the sheerline and Fairbody line.  See Addendum One for these locations.

Create an 'y' Offset (Plane), named hull cl plane, on the centerline of the hull.

Move, in profile fairing bead aft and chine bead aft until they coincide with the (3-Point Plane), named transom plane.

Your Model File should now look something like this rear prospective. [Figure XIV-P]

Choosing a surface type for the flat bottom surface [Figure XVI-XYZ]  of the Bezier 12.5 is not a straight forward choice.

One would naturally assume that a (Developable Surface) would be the natural choice.   However, I am going to use a  (Ruled Surface) for the Flat Bottom shell plate named bot surf ruled.  The parents are chine long and lower Fairbody long.

Transverse Master-Curve locations are determined, by the Designer, at locations that best define the ultimate hull form.

Longitudinal Master curves are 'Fairing' curves.  Fairing the hull is an interactive procedure.  Changing one location of any points affects every other aspect of hull shape.

All the 'Points' are at their final location.  The hull was faired using the tools within the 3D marine design Program.

You can find a list of the points that define the 'Model File' in Addendum One.

This concludes creating the 'Modell File'.  In the next Chapter the Transverse frame will be Profiled. 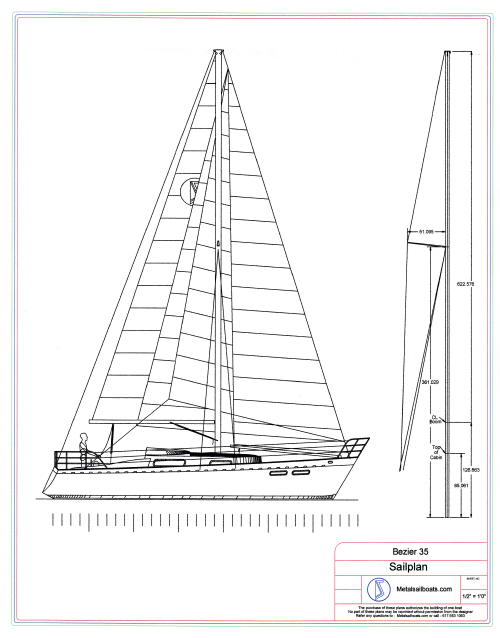