Mathematical Algorithms can flatten a computer generated three dimensional 'True Round' surface onto a single plane, defining both the  perimeter of the blank and 'Strain' counters which will direct the roller of an 'English Wheel' to form the sheet-metal, from which the hull will be built, back to its three dimensional shape.

In this example, the 'True Round' center surface (green) of the 'Bezier 28' will be flattened onto a single plane, then the process of forming this flat sheet-metal layout back to its intended three dimensions will be discussed. 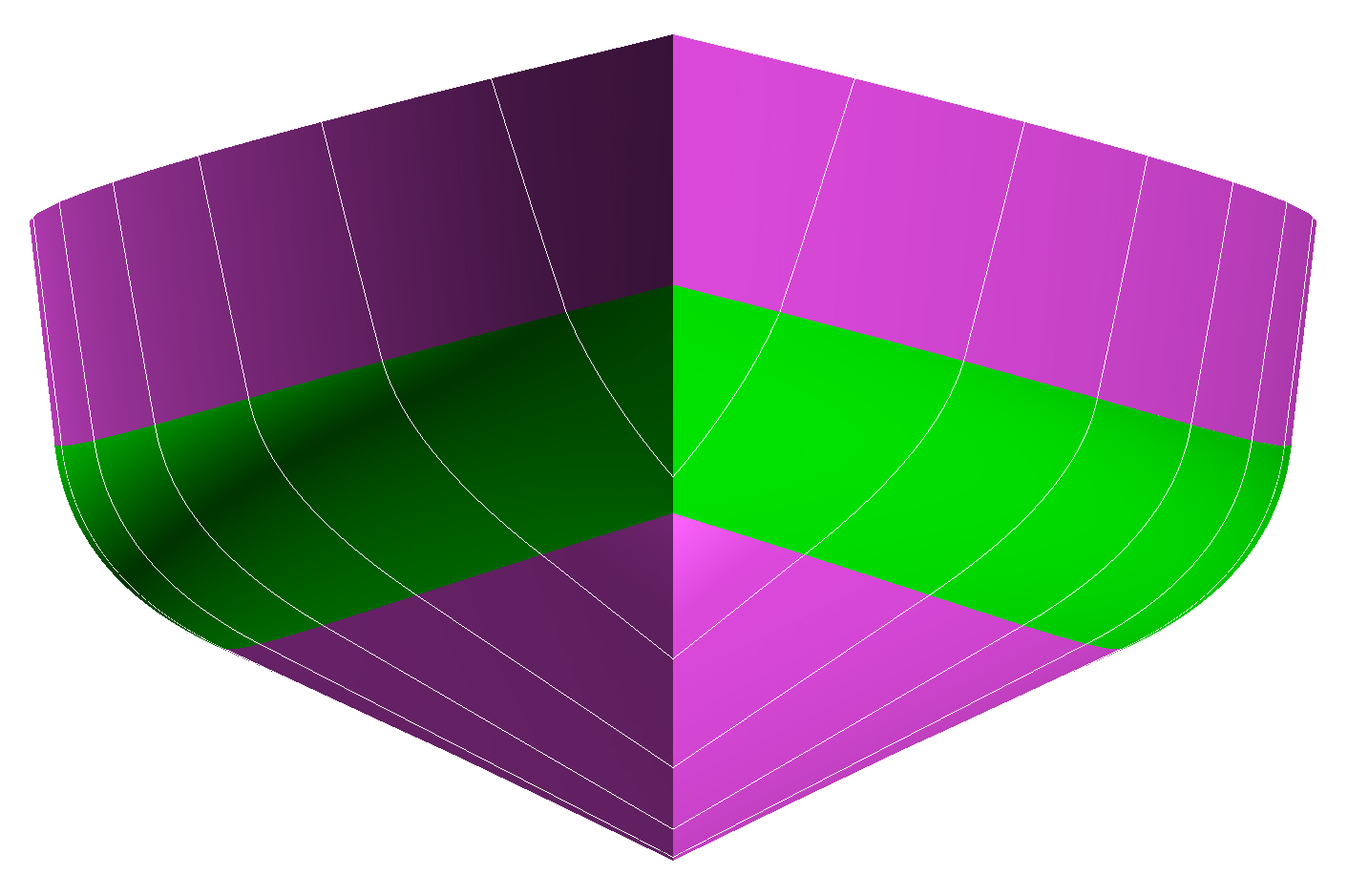 What is unique about the 'Bezier 28' is that it is designed with a combination of surfaces types.  The upper and lower surfaces (magenta) are 'Elementary' or 'Developable' surfaces.

This type of surface is used in 'Hard Chine' designs.  In the 'Bezier 28' they are used for ease of construction, while providing the look and feel of a 'True Round' design by placing a 'True Round' surface (green) between 'Developable' surfaces.

To that end Computational software using Mathematical Algorithms were used to reduce the three dimensional computer generated  "True Round' surface (green) of the 'Bezier 28' onto a single plane.

The image below represents the entire length of the flattened 'True Round' surface.

It however, would be impracticable from a construction standpoint to form the entire surface length of the 'Bezier 28' in one piece.  Common practice to divide the surface into workable segments.  Therefore, the above pattern is divided into four sub-patterns.  Each segment is just under eight feet in overall length, a standard sheet length for sheet material. 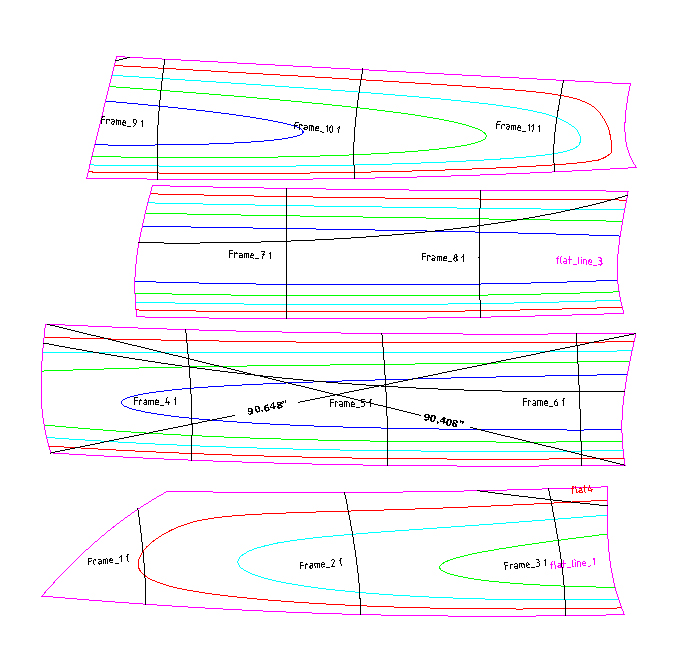 The next image is the flattened layout for the second section from the bow of the 'Bezier 28'.  Shown is the flat pattern itself and the plywood 'Forming Templates' used to guide the 'English Wheeling' process. 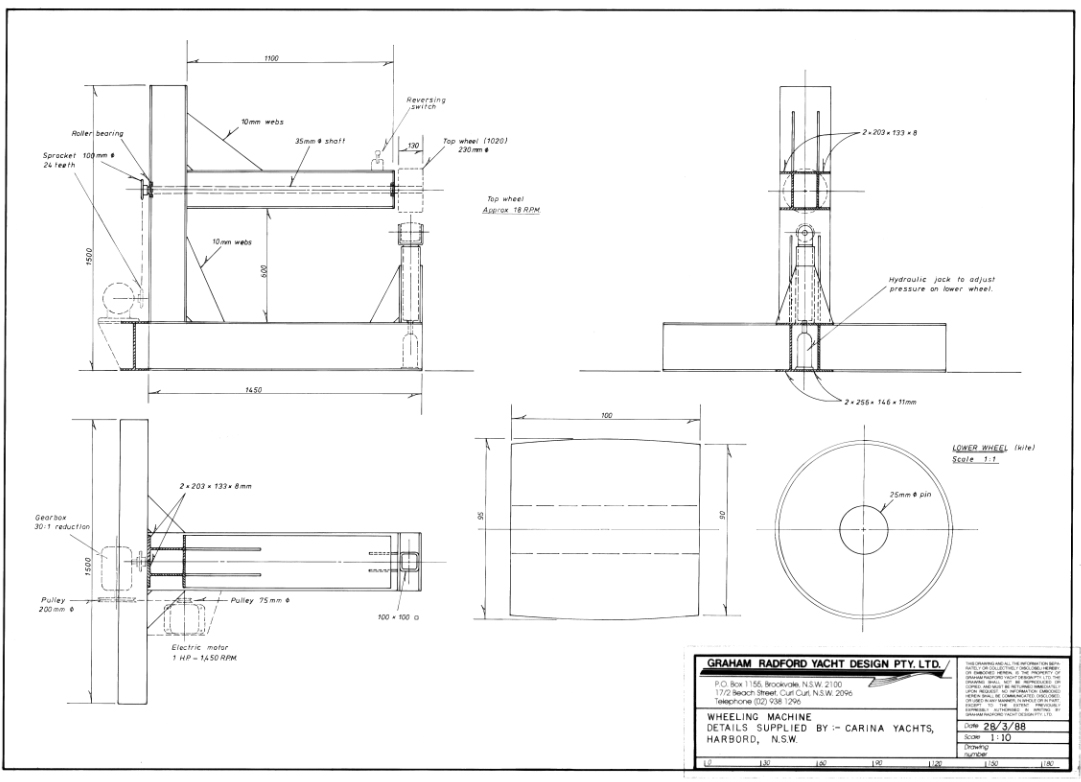 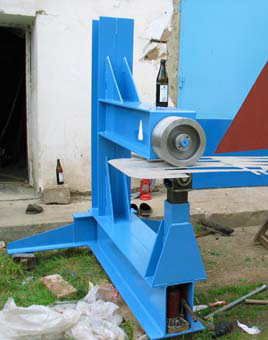 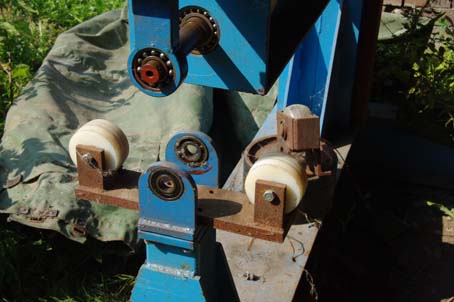 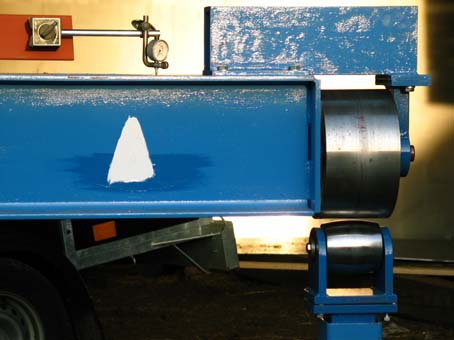 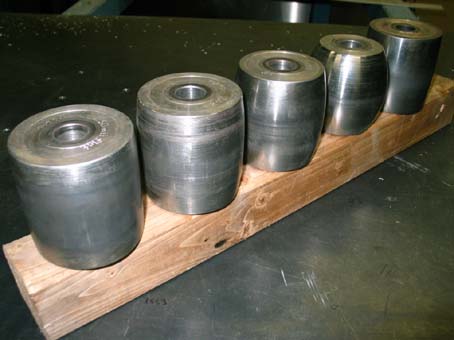 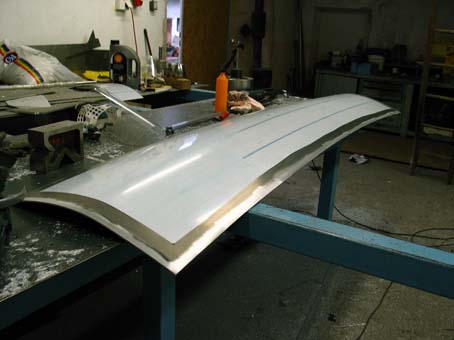 
The English Wheel in Use

The below link takes you to a 'YouTube' video post detailing the use of the 'English Wheel' to form the 'True Round' aluminum shell plating for the 'Orion 49'.  Highlight the below link, then click. 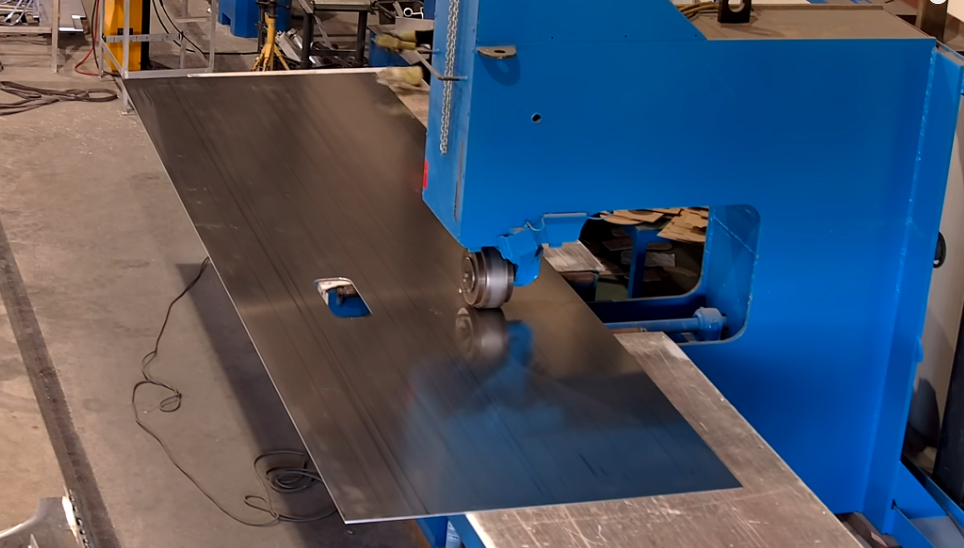 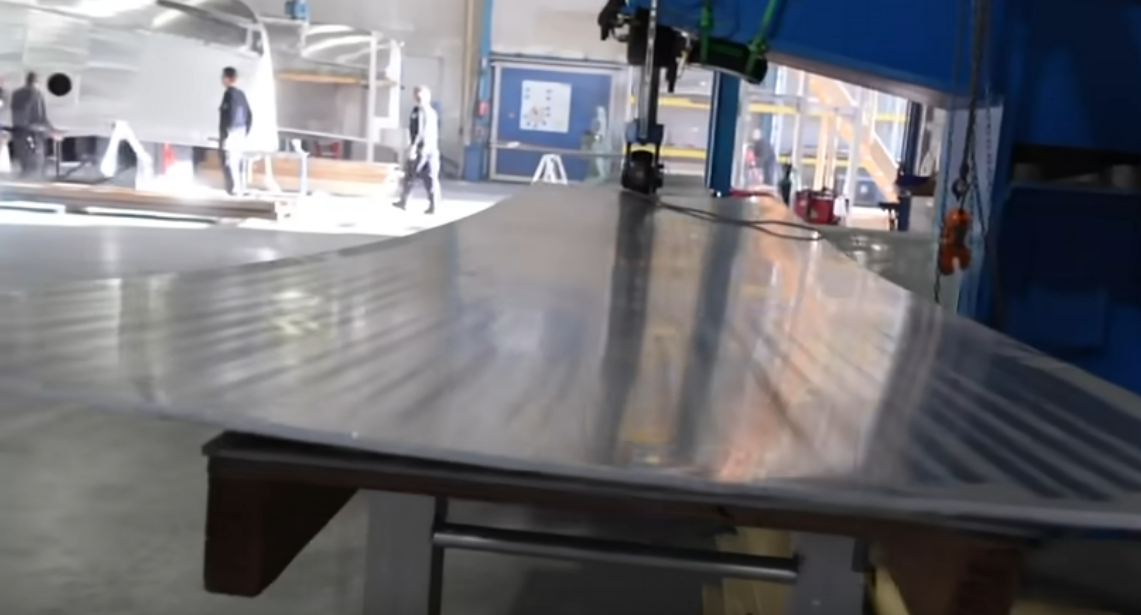 The following images shows the progress of forming a plate using the forming templates at their given locations. 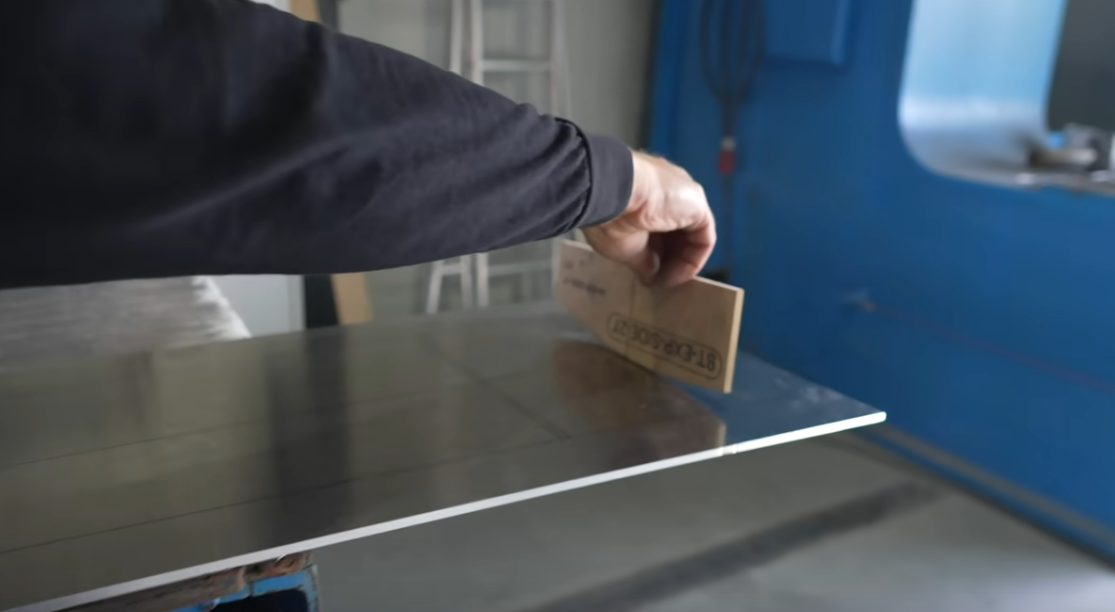 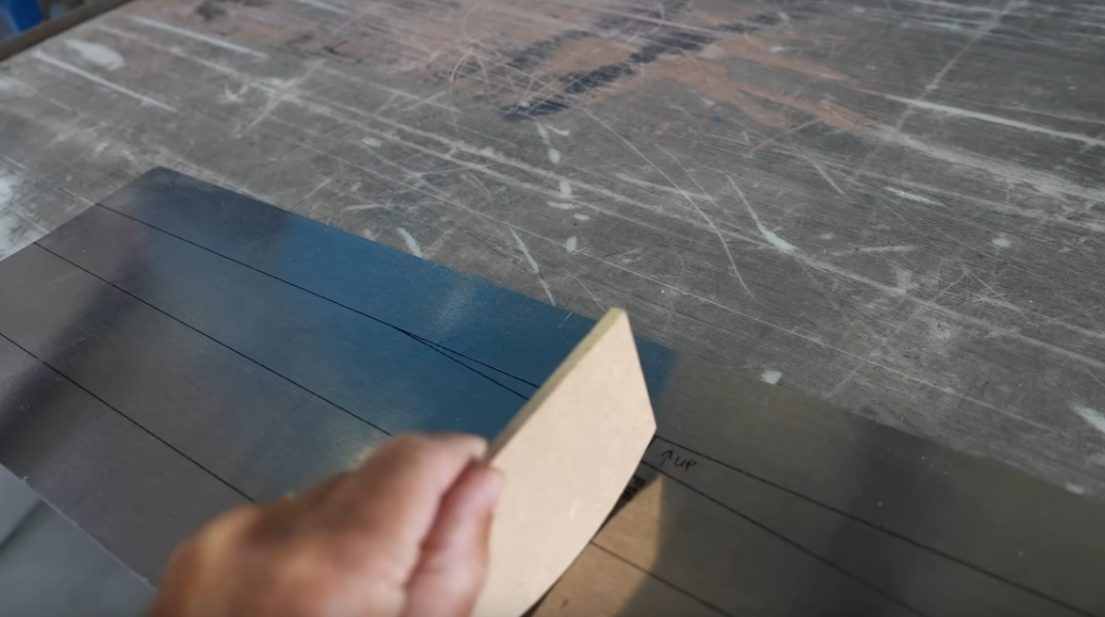 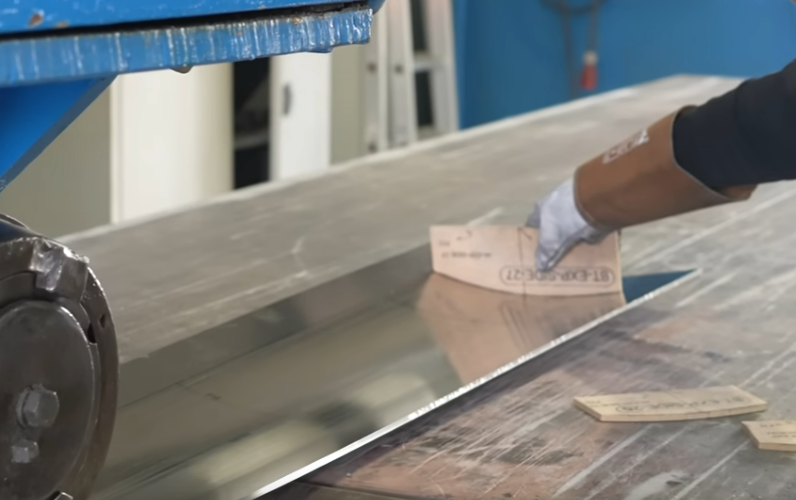 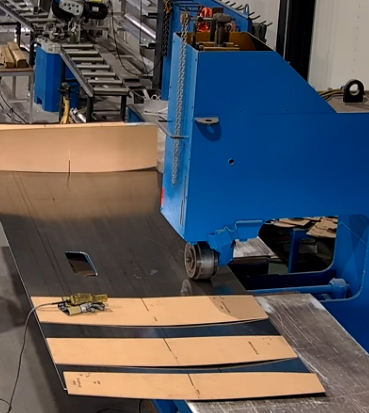