The hull parts can be divided into three basic groups: Longitudinal frames, transverse frames and the shell plating. Bezier Chine design defines all these parts, for the builder, thru full size patterns and Cnc cutting files. Bezier Chine designed boat are 'Kit Boats'.

There is a great degree of versatility in Bezier Chine Designs. Depending on the construction material, your equipment, your skills and budget.

Longitudinal frames can be Cnc cut, saw cut or rolled formed. Each method is fully detailed in my book 'True Round Metal Boat Building'. Below is an example of rolled formed Longitudinals 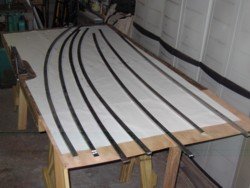 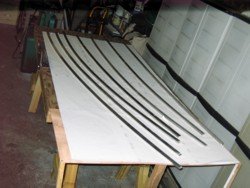 The same degree of versatility is extended to the transverse frames. Below is a representation of a sheet of full-size patterns. Below that is a completed frame assembly which was fabricated from that pattern.

The Shell plating is the heart of 'Bezier Chine' design and construction. No other design method pre-engineers shell plating. Shell plating can be Cnc cut, saw cut or hand cut using plasma or oxygen-acetylene torch. Below is a typical shell pattern for the Bezier 12.5, along with a description of its parts.

Pictured below is a pattern being formed in the press break. My book 'True Round Metal Boat Building' detail the entire shell plating forming process.

Back to Home Page 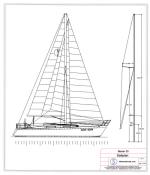